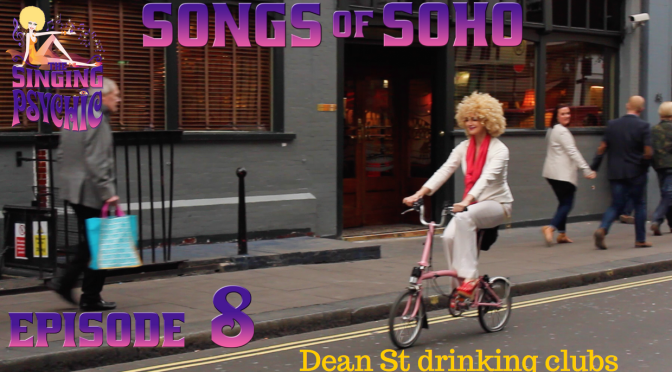 The legendary drinking clubs of Soho-ites, actors, musicians and artists Groucho club, Blacks and Colony Rooms sing their songs of grabbing the moment to The Singing Psychic. Fast wit, champagne and ‘reading is fundamental’ a la RuPaul flies round these clubs.

‘Who wants to live forever’ The Singing Psychic ‘reads’ the songs only she can hear on Dean Street, centre of Soho London

Episode 8 of my part comedy part documentary SONGS OF SOHO Webseries – the Singing Psychic reads the music of the legendary Dean clubs where everyone from Dylan Thomas, Francis Bacon, Damien Hearst and indeed The Singing Psychic have flirted, got trashed and had way too much late night fun,

Episode 8 of comedy web series SONGS OF SOHO in which The Singing Psychic reveals what the very buildings themselves sing to her.

The Singing Psychic  walks through a world of music: people’s hearts sing to her and even buildings themselves can’t help but sing their songs to her. Nowhere in the world do the buildings sing as loudly to her as in Soho, London, the ‘Wild West End’ of Europe, for centuries the centre of sexual freedom for all and the right to be who you want to be. Soho welcomes all from drag queens, hookers, the LGBT community and party goers of every sexuality and dress sense.
ever cabaret webseries

My next live London shows

here is the trailer for the shows.