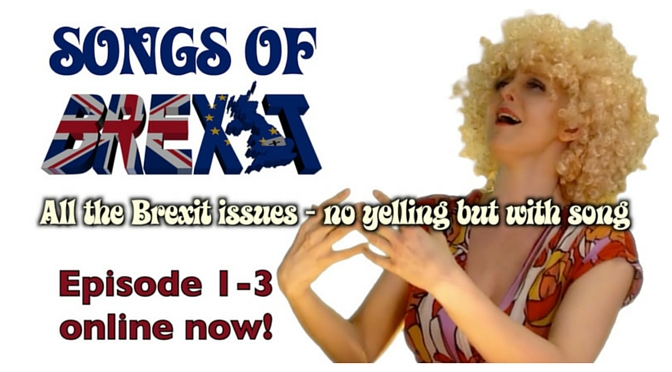 Hello my dears, thank you for being here. Here it is, my comedy webseries SONGS OF BREXIT which launches today, ahead of my Edinburgh Fringe run this summer. I am currently doing shows at the Prague Fringe Festival. Episode 1

Confused how to vote at the EU referendum? Watch SONGS OF BREXIT!   No yelling, balanced facts but with song.  Is the only rational pros and cons debate on Brexit by a  Singing Psychic?

The Singing Psychic walks through a world of music but all Londoners hearts are just singing ‘Should I stay or should I go now’ as they worry about Brexit.
In response to this The Singing Psychic has made a 17 episode webseries covering all the areas of the Brexit debate from the composition of the UK economy, immigration and single farm payment.

17 episodes 2 minutes each    Launches Friday 3rd June 2016  First 3 episodes up, then every weekday at 10 am culminating in a live stream on June 23rd at the Houses Of Parliament.