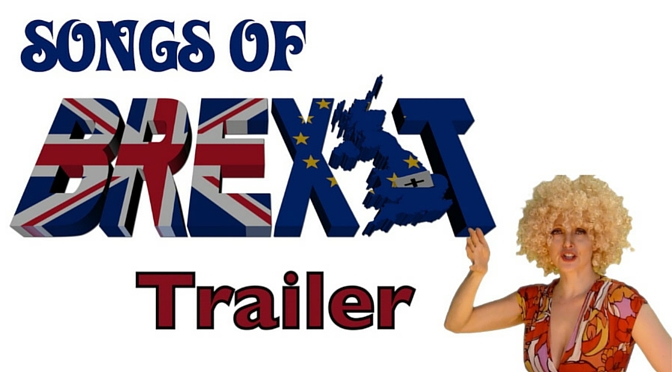 Hello darlings, I am writing this from Prague as I am doing some wonderful shows here as part of the Prague Fringe Festivals. However even in the midst of the excitement of having new hearts to read my webseries SONGS OF BREXIT is launching tomorrow Friday June 3rd at 10 am UK time. Here is the trailer!

Trailer: Songs of Brexit The Singing Psychic by TheSingingPsychic
Here is the trailer to SONGS OF BREXIT launching live on Daily Motion Fri June 3rd 10am London time. Here http://www.dailymotion.com/TheSingingPsychic

I, The Singing Psychic reads the songs in everyone’s hearts and every Londoner’s heart is singing ‘Should I Stay Or Should I Go Now?”. So I have made a 17 episode webseries looking at the pros and cons of the EU/Brexit debate – no yelling, just balanced facts and figures but with song.

The first 3 episodes are being launched on Fri June 3rd 10am London time UK time and then there will be a new video up daily every weekday (not weekend days) until the Brexit vote June 23rd.

Let me know which songs you have been singing to yourself today!

She performed at the Brit Awards Official Afterparty at the 02 in February 2016, did some private readings at Cannes Film Festival 2016 and she will be performing at the Prague Fringe Festival June 1st to the 4th 2016, various corporate gigs including a wedding are also booked and she will also be performing from Aug 7th to the 26th at Edinburgh Fringe this year.
In 2015 she did a week at the Tristan Bates theatre in the West End and a week of corporate christmas gigs doing Singing Psychic readings from a yurt!