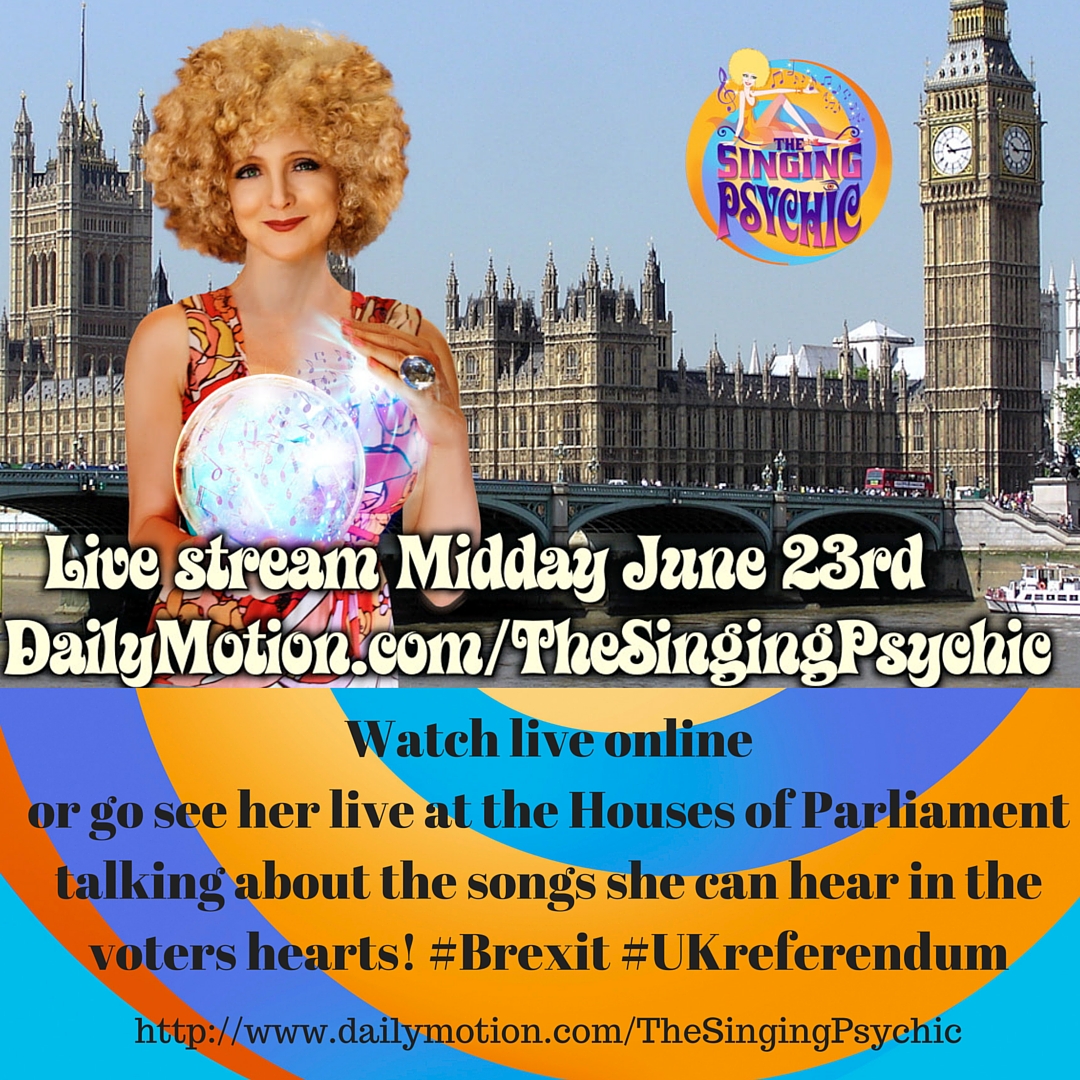 Hello my dears 😉 Yes you can join me live at the Houses of Parliament either online or in person! I am live streaming from there so you can ask me questions and see the world through my own world of hearing the songs in everyone’s heart. I will be touching on all the issues on Brexit that I have covered in my webseries. I am planning to use a mix of Daily Motion and Periscope/Twitter for live – my twitter handle is @singpsychic
My spirit guides seem to be getting in the way of my tech so I may well be live on periscope/Twitter at midday @singpsychic not here – just warning you ;))
intro Video live at midday and then the live stream

To watch the whole series you can see it all on

The live stream is the culmination of the 19 part ‘Songs of Brexit’, which is an online musical guide to the European Union, in character as ‘The Singing Psychic’.

‘She certainly knows how to entertain’ **** Three Weeks

Where: Houses of Parliament
When: From 10am to 8pm June 23rd.
Live stream Midday
Press Availability: The Singing Psychic will be filming in the area all day from 10am and is available for brief interviews with press as required.

Link to The Singing Psychic London Live TV interview on it

Confused how to vote at the EU referendum? Watch SONGS OF BREXIT! No yelling, balanced facts but with song. Is the only rational pros and cons debate on Brexit by a Singing Psychic?
Episode 1 link https://www.youtube.com/watch?v=CHkfwEkE5L4 Link to entire series (on Daily Motion) http://www.dailymotion.com/TheSingingPsychic
The Singing Psychic walks through a world of music but all Londoners hearts are just singing ‘Should I stay or should I go now’ as they worry about Brexit.
Songs of Brexit covers all the areas of the Brexit debate from the composition of the UK economy, immigration and single farm payment.

Schedule of all episodes

There is a new video up daily until the Brexit vote June 23rd when I will be live streaming from the Houses of Parliament.

All new episodes are up on Daily Motion http://www.dailymotion.com/TheSingingPsychic

Episode 1: Introduction and overall view of what Songs Of Brexit is about, covering the pros and cons of all sides of the EU referendum, no yelling, facts and figures but with song.

Episode 2 Why is the UK in the EU?

This episode looks at the trade data, how the EU is the world’s largest trading zone, and 500 million wealthy customers

Episode 5 ‘Let’s stay together’ What the £ is singing!

Episode 5 is on the UK currency and it’s current weakness against the US Dollar and the Euro.

Episode 6 is about renegotiation of new trade agreements if the UK does leave the EU on June 23rd, possible outcome.

Episode 8 is the second of 3 short videos on immigration within SONGS OF BREXIT, this one focuses on British expats living in the EU but not in the UK.

Episode 9 is the third of 3 short videos on immigration within SONGS OF BREXIT, this one focuses on how the EU always links freedom of movement (migration) with all trade agreements

Facts include 38% of all lamb and mutton sales go to the EU (non UK) and £200 million of lamb was sold to France in 2014 alone. There has been no sales of UK beef to the USA since the BSE scare, 20 years agohttp://dai.ly/k4H6axadvazwJEid4dY

‘Eat The Rich” the EU Single Farm Payment – how it is calculated, who gets it and possible consequences of Brexit.

Episode 13 ‘Gotta move these refrigerators’ Big v Small Corporations – This episode is all about how depending on whether you work for, or are a big or small  company, how the EU effects you. For small business all the EU red tape can make the difference between a profit and a loss, however for big business all the EU standardisation of packaging, legal requirements etc lead to economies of scale over 28 member states.

This is about all the EU legislations embedded within the UK legal system.

Episode 15 looks at the EU opt-outs. The UK has more opt-outs than any other country including not being forced to have the Euro, be in a European superstate or part of a European army

What other EU nations think of the UK referendum and the current situations of Turkey and Switzerland.

What the polls are saying, everyone’s vote really does count as the undecided vote seems to have increased.