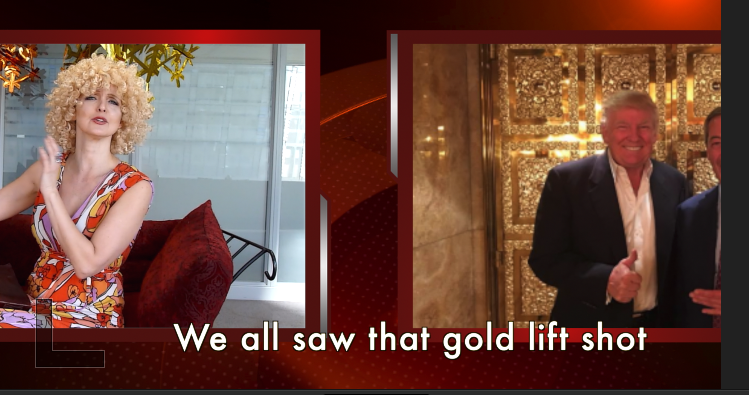 I, The Singing Psychic, look at the songs I can hear this week, from what that gold lift was singing as it carried Donald Trump and Nigel Farage, (it is still traumatised), the passing of the UK’s Investigatory Powers Bill and Honey G’s continuation in X Factor.
This is the new weekly series where I look at the events of the week from politics to entertainment and reveals, as only I can, the songs I can hear. It always finishes with the Song Of The Week Forecast for the coming week.


The Singing Psychic walks through a world of music: people’s hearts sing to her and even buildings themselves can’t help but sing their songs to her.

Rough transcript of this weekend’s show November 25-27th 2016.
I am The Singing Psychic. I walk through a world of music and I hear all the songs in people’s hearts. We are going to look at Nigel Farage and Donald Trump, the Investigatory Powers Bill and of course Honey G.
We all saw that gold lift shot of Nigel Farage and Donald Trump. You know what that lift is singing to me? ‘I’m on a highway to hell’. Poor lift, so traumatised.
But I was Looking at the songs around Mr Farage’s birth and, well,  the big song in his life is ‘Cant Buy Me Love’. He has tried. That poor man just needs attention. I think his wife needs to give him more love and Then he can stop hassling us.
The Investigatiory Powers Bill, This has been championed by Theresa May for so long and Now has passed both Houses in the UK. This is problem because this insists that all internet and telecom provider companies must keep track of all our, yours and mine, internet usage, website and app you are on. Plus all phone calls & messages for 12 months.Every time you go, ‘To the left, to the left’ on Tinder it’s going to track it. ‘Every breath you take, every move you make, I’ll be watching you.’ Yes they’ll be watching you. At moment, only people who can save us is the EU, as long as we are still in it. The European Court of Justice is looking at this in a court case. I don’t want people knowing what I say to my boyfriends. No! Did I say boyfriends? It was boyfriend, single. And finally Honey G. We love her, well I do. The song is her heart is ‘I want you to want me’. I could do with a nice baseball cap right now. Do we have baseball cap? No. I don’t really do baseball caps with this. She so wants to be loved, that poor girl. So love her. And you know what? The X Factor is not a singing competition, it’s entertainment. If you want to go and really support singing and music and live real art, go out, find a local band, local songwriters, go and see stuff, see DJ’s. None of this sitting in front of tele on Saturday night. My god. Go and get a life! So Song Of The Week, which is another one of Honey G’s ‘Girls just wanna have fun’. Yes go out and have fun this week, stop focusing on what was behind and look forward!  I am The Singing Psychic and I hope to see you at my show in London on Tuesday. Bye bye, Do widzenia.

Her award nominated Edinburgh Fringe 2016 will next be shown in London Sat 18th Feb 2017, 6.30pm at the Vaults Festival.

The Singing Psychic has ‘read’ the songs in her audiences’ hearts across Europe in 2016 including her award nominated sell-out Edinburgh Fringe run (Best Show, Funny Women), the Brit Awards Official After-Party at the O2,  Cannes Film Festival, Prague Fringe Festival plus her 120 videos including her ‘Songs of Brexit’ webseries as seen on London Live TV. The game show is new  – where 70s games and psychic readings make for a truly bonkers night out.