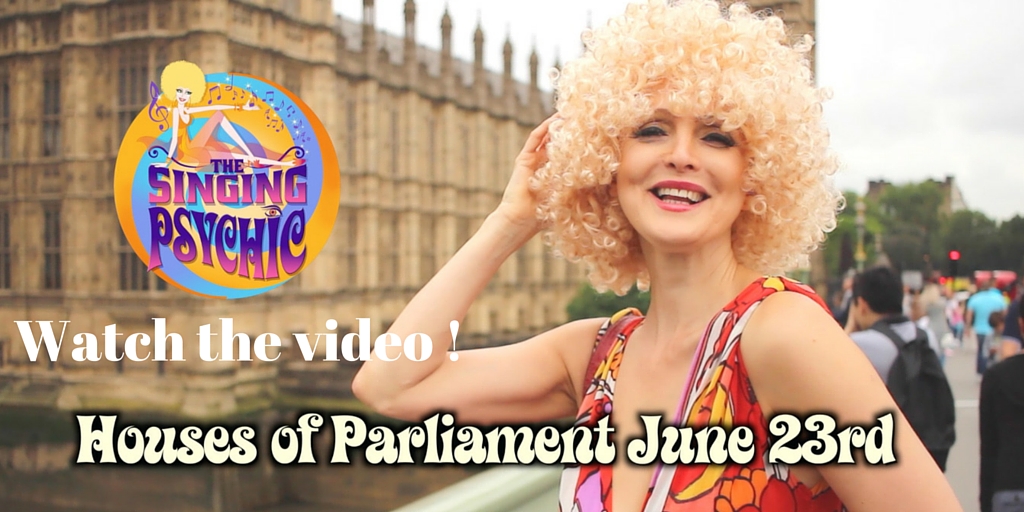 Me, live at the Houses of Parliament today, singing the songs I hear in the voters’ hearts. Plus I make a prediction on the vote based on that 😉

I predict the UK Referendum result – Live from… by TheSingingPsychic

If you still wondering (4 hours left to vote) my 19 episode webseries Songs Of Brexit covers all the main issues- balanced facts and figures, no yelling but with song. Watch it here.

There is a new video up daily until the Brexit vote June 23rd when I will be live streaming from the Houses of Parliament.
All new episodes are up on Daily Motion http://www.dailymotion.com/TheSingingPsychic

Episode 1: Introduction and overall view of what Songs Of Brexit is about, covering the pros and cons of all sides of the EU referendum, no yelling, facts and figures but with song.
Link http://www.dailymotion.com/video/x4dcya2_ep-1-should-i-stay-or-should-i-go-now-songs-of-brexit-by-the-singing-psychic-the-pro-s-cons-of-brexi_fun

Episode 2 Why is the UK in the EU?
This episode looks at the trade data, how the EU is the world’s largest trading zone, and 500 million wealthy customers

Episode 5 ‘Let’s stay together’ What the £ is singing!
Episode 5 is on the UK currency and it’s current weakness against the US Dollar and the Euro.

Episode 13 ‘Gotta move these refrigerators’ Big v Small Corporations – This episode is all about how depending on whether you work for, or are a big or small company, how the EU effects you.

Episode 14 ‘Marry a lawyer’
This is about all the EU legislations embedded within the UK legal system.
Episode 15 looks at the EU opt-outs. The UK has more opt-outs than any other country including not being forced to have the Euro, be in a European superstate or part of a European army

Episode 16
‘If you love me, say that you love me’
What other EU nations think of the UK referendum and the current situations of Turkey and Switzerland.

Episode 18
What the polls are saying, everyone’s vote really does count as the undecided vote seems to have increased.